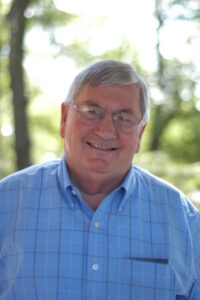 I think I always wanted to be a writer and editor, and this was partly confirmed as a high school freshman when and I won a trip to New York City, Washington D.C. and the east coast with an essay on the role cooperatives play in strong rural communities.

Next, I won several high school U.S. Constitution speaking contests and was also active in 4-H and FFA and our Chapter won the National Dairy Judging Contest in Waterloo, Iowa and I was a team member. My FFA career ended as State FFA President. These activities led to my first job with the National Future Farmer magazine, where Editor Wilson Carnes encouraged me to join AAEA in 1961.

Much has been written about 1984, the year I was president of AAEA. Most recently, Gary Vincent did a good job of covering the Flame meeting in his May 6, 2021, Past Presidents Column. Sadly, Gary passed away on July 8, 2021.

In this article, I want to focus on what AAEA has lost over the years, including the U.S. Ag Communicators Conference in Washington D.C. The annual meeting started in June 1984 and continued for numerous years. I remember presiding over a lavish luncheon at the State Department and meeting then-President Ronald Reagan. The event was also memorable because former California Farmer Editor and Publisher Jack Pickett and his wife were in attendance. I landed my job with the magazine because Jack was a former AAEA member.

Why not a Washington D. C. conference now, I once asked former AAEA Executive Secretary and Treasurer Paul Weller. He, along with Wilson Carnes, myself and Jack Pitizer worked at the National FFA magazine together. Paul reportedly replied, “Much of AAEA’s incentive to come to D.C. centered around Claude Gifford’s offer to get members an audience with the United States President during Claude’s tenure with the USDA in the 1970’s.

“The conference usually included a photo with the President, starting with Richard Nixon,” Weller allegedly continued. “That gave rise to briefings with USDA and Congressional officials on current issues. During that same period, Jim Webster, fresh from public affairs with the USDA under then- U.S. President Jimmy Carter, was being bombarded by farm newspapers (NFEA) to set up briefings for their members. One day, Webster cornered me and reportedly said, ‘Why don’t you guys get your act together and have an ag media briefing in D.C.?’

“That gave rise to the first of five “U.S. Agricultural Communicators Congress’. I managed all five of those: 1984, 1988, 1992, 1996, 2000, each during a presidential election year,” Weller purportedly added. “We eventually added ACT, the Livestock Publications Council, the Ag Relations Council, and Ag Extension Editors to the group of invitees.

While Paul is probably right, I don’t think we should give up. The fact that AAEA is not involved in Washington DC is probably not a good or bad thing. It is more like what American Writer Henry Miller once said, “One’s destination is never a place, but a new way of seeing things.”

Surely, AAEA members could learn something to share with their readers and see things a little differently.

The AAEA summer meetings ended with my presidency, but I still think there is a need for them. Members miss a lot if they only know people on a professional level.

That brings me to relationships that have left a lasting impression on me. One day out of the blue in September 1997, I got a call from Patricia Orlowitz, an USAID program officer for the Republic of Moldova. Patricia was part of the Flame meeting, that also included Fred Myers, John Harvey, Joe Dan Boyd, Gary Vincent, Cordell Tindall, Earl Ainsworth, Wilson Carnes, Monte Sesker, Del Deterling, Gary Reynolds, Carolyn Eselgroth, Jack Pitzer, Jim Dickrell and Dan Henning.

Patricia wanted to know if I could set up a tour of California wine country for Moldovan officials. I said yes but didn’t think I should manage the event. I suggested my wife Mary could do it— and she did. Mary served as a consultant and arranged travel and accommodation for the eight member delegation.

Why are Moldovan leaders interested in wine? Moldovan wine, food and culture, are at the heart of the country. Formerly part of the Soviet Union, Moldova was once one of the USSR’s most-fertile territories, and its agricultural sector continues to flourish today. Fossils indicate that grapes have grown in the country as far back as 25 million years ago, and it’s suspected the fruit had been cultivated in Moldova since around 2800 BCE. Ties with the Romans and Greeks helped nurture the industry, while the Ottoman occupation, coupled with two world wars, and the phylloxera epidemic damaged it.

Fast forward to 1997, we met the Moldovan President and Head of Agriculture at the San Francisco airport and took them to a hotel in Concord, California. The next day we toured several major Napa wineries before traveling to the Lodi region. We ended the day at the UC Davis Viticulture and Enology Department, where we toured their famous wine cellar.

Dinner that evening was in Sacramento and included some business and wine experts—a few who had been to Moldova. The next morning, we were going to tour Iron Horse Vineyards in Sebastopol (somehow, I learned the owner had family roots in Moldova).

Except we were awaken by a phone call from Patricia who indicated the Moldova was in danger because of on-going politics. She asked Mary to rent a car and drive the Moldovan President to San Francisco airport. Patricia told me to continue with the planned tour, adding they were in touch with the President by cell phone.

There were phone calls flying all around as we held our breath. At the last minute we were given a reprieve and arrived at the Iron Horse Vineyards while it was still morning. Ironically, the staff met our bus with glasses of champagne.

Barry Sterling’s wines made their debut with a Blanc de Blanc poured at a White House state dinner during a summit meeting between former President Ronald Reagan and Soviet Leader Mikhail Gorbachev in 1985. Sterling, a former corporate lawyer, became a viticultural trendsetter at Iron Horse, defying experts who said it was too chilly for the chardonnay and pinot noir grapes he intended to nurture.

After the tour, we settled in for lunch in the vineyard’s stylish Queen Anne Victorian farmhouse. Following a hearty lunch, Sterling told us of his family roots in Moldova. He eventually became a successful corporate lawyer but yearned to settle into a vineyard lifestyle much like he had experienced while visiting a chateau vineyard in Bordeaux, France.

Iron Horse Vineyards was his dream come true. As his story unfolded, you could feel a rising tide of emotion. Many of the Moldovan officials’ eyes welled with tears. So did mine. Sterling had driven home the point of how much the Moldovans had lost with the limited cultivation of private plots on their soviet style collective farms.

Back at the hotel, Mary and I would normally escapeto the bar for a night cap—a secret we thought the Moldovan’s didn’t know about. However, that night, many Moldovan officials came into the bar, spotted Mary and I, and told us of the differences they had learned from Sterling. We were taken aback. I remember Mary said to me, “Wow that was something!”

As our tour was ending, we headed to San Francisco. The group was amazed by the Golden Gate Bridge. We took them to Lombard Street (often called the most crooked street in the world). The Moldovan officials all got off the bus and walked up and down the crooked street to the bottom of the hill. Our last stops included a meeting at the Wine Institute and a luncheon at the famed Garden Court of the Palace Hotel, before departing for the airport.

We said our goodbyes and the Moldovan President gifted us with a selection of Moldovan Wine. While the wine is long gone, we think of the Moldovans whenever we enjoy a glass of vino.

Len’s honors include being selected as California State Fair’s Agriculturalist of the Year in 2007, the first journalist to receive the honor. He was named “Brother of the Century” in 2007 by Alpha Gamma Rho, the National Agricultural Fraternity. He is also a member of the Fraternity’s Heritage Club representing Alpha Pi Chapter, at the University of Arizona where he was a founding member. Len also received the 2015 “Lifetime Achievement Award” presented by the American Agricultural Editors Association.