When I look back at my time in South Africa during the 2017 IFAJ Congress many things stand out. The scene I keep going back to is Kurt Lawton, editor of Corn and Soybean Digest, and I both standing in the middle of corn and soybean field outside of Pretoria. It felt so familiar.

The corn and soybeans were the same height as they were in Illinois. The yields were similar. The farmer grew genetically modified varieties. The crops were subject to insect and weed pressure. The planting densities were similar. The corn and soybeans were used to make feed for poultry and livestock. If it wasn’t for the red dirt roads and lack of towering grain elevators I would have thought I was back home. But I wasn’t. 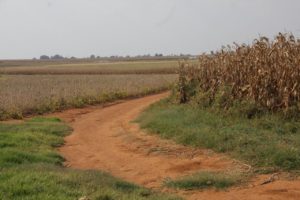 According to the U.S. Commerce Department’s International Trade Administration (ITA), the grain industry – barley, maize, oats, sorghum and wheat- is one of the largest agricultural industries in South Africa, contributing more than 30% to the total gross value of agricultural production.

South Africa is well-known for it’s wheat production but this has declined in recent years due to lower profits. Wheat has been replaced by crops such as canola, soybeans and corn, which is another staple crop.

What also sounded familiar was the role of international trade to South African farmers.

In the United States, more than half of our soybean crop is exported each year and about 25% of that crop goes directly to China. Plus there are the pork and poultry exports that support the soybean industry. It relies on key markets such as China, Mexico and Taiwan. But it also faces competition from Brazil and Argentina in those markets. And there is  Indonesian and Malaysia palm oil to contend with on the biodiesel front. 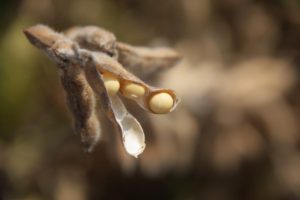 Exports also are important for the South African grape industry. In fact, we can buy both South African table grapes and wines, such as pinotage, in the United States. While some agricultural products end up in North America, South Africa exports many of its products to other African countries.

According to International Trade Administration, “The agricultural sector contributes around 10% to South Africa’s total export earnings. South African produce, mostly harvested during the northern hemisphere’s winter, has achieved remarkable success on foreign markets and is well-known for its uncompromising quality. Citrus and wine, in high demand abroad, account for the largest volume of exports.”

While the U.S. and South Africa value imports and exports, both countries have concerns about dumping in their countries. For example, in the U.S. the biodiesel industry recently expressed concerns about Indonesia dumping palm oil into our market. On May 18, the National Biodiesel Board argued that a biodiesel trade deficit with Indonesia is fueled in significant part by increasing volumes of unfairly traded biodiesel imports from the Asian country.

While we were in South Africa, we heard concerns about the U.S. and Europe dumping dark meat chicken into the South African marketplace. The chicken industry had concerns that this would hurt their chicken farmers and their competitiveness. We heard this story from both small and big farmers. This story made the news again earlier this summer.

The South African poultry meat industry, with a gross value of more than R30 billion, is the country’s largest individual agricultural industry and contributes almost 16% to the total gross value of agricultural products, according to the ITA. Broiler meat consumption increased by about 70% since 2000 and is now the most important protein source in the diet of the majority of South Africans. In 2015, South Africa consumed more than 1.8 million tons of broiler meat.

These stats help explain why the poultry, and grain industries, are so important to this Southern Hemisphere country. With an unemployment rate of about 27%, agriculture is viewed as a top prospect for job growth, said John Purchase, CEO of AgBiz.

On each international IFAJ trip that I take, I’m drawn to the import and export stories. Maybe it’s because I work for an industry- soy- that is very much reliant on exports and global trade. In New Zealand, we learned about dairy and kiwi exports. In Scotland, it was about whiskey and lamb exports. In Sweden we learned about the lack of exports due to a short growing season and in-country demand.

On a personal note, I’m tremendously appreciative of the opportunities AAEA, PIF and IFAJ have provided me to explore these various markets and meet an amazing community of agricultural journalists.

For more info on South Africa’s exports, check out this infographic from MIT