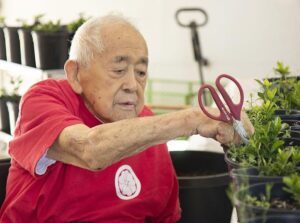 “Story Behind the Story”

The idea for this story came out of conversations I had over time with growers in the nursery industry. The anecdotes that popped up again and again hinted at Japanese-Americans having a significant impact on U.S. agriculture; certain flowers and farming methods, for example, are traced back to Japanese-American communities.

Tsutomu Dyo, middle row, second from right, with a group on detainees
at the Lordsburg, New Mexico Detention Center, one of the locations
where he was incarcerated.
(Courtesy: Tommy Dyo)

Intrigued, I set out to learn more. In reading extensively and talking to historians, I began to unearth an incredible story about a people who farmed American soil in the early 20th century, continued to farm and garden inside incarceration camps and, postwar, left a lasting mark on the nation’s food, floral and landscaping industries.

But I didn’t want this to be a theoretical, 5,000-foot-level story with only historians’ voices. I wanted readers to meet survivors and their descendants up-close.

Because World War II happened a long time ago, I knew finding a survivor of a Japanese-American incarceration camp who had an agricultural background was a tall order. So, it actually took months to track down the right people to talk to. I reached out to historical organizations, commodity groups and many farmers.

George Tsugawa picks weeds from planted pots in his garage in Washington State.
Despite being 99 years old, he continues to garden and help with the family-run nursery.
(Courtesy: Sierra Dawn McClain, Capital Press)

With help from various sources, I was introduced to George Tsugawa, a 99-year-old nursery owner and prison camp survivor, Janice Munemitsu, whose family had a major impact on American history, and Tommy Dyo, descended from incarceration camp survivors.

I was surprised that George Tsugawa was willing to meet with me in person during the pandemic in 2020, but I’m so glad he did. Hearing his story in person gave me exactly what I needed to humanize this story.

I’m also glad I wrote the story when I did, because a few months after I interviewed Tsugawa, he died on November 27 at age 99. He had invited me to come back post-pandemic so he could make me a Japanese dinner. We never got to share that meal, but I’m so grateful he shared his story with me.

My story was subsequently re-published by the Japanese American National Museum and was translated into four languages.

Story Behind the Story: “Flying Farmer: One Man’s Journey to Reach New Heights on the Farm and in the Clouds”

This story started with an idea from my managing editor. He had heard of Bryan Harper a few times from people in the local agricultural community and was intrigued by what he heard: that Harper was a fifth-generation farmer, pilot, former sprinter for the University of Oregon and one of few young Black farmers in the state.

So, at my editor’s request, I set out to introduce myself to Harper for a profile story.

There are three main challenges I typically face when writing a profile, and all three of those played out in this case: fact-checking a person’s personal life, finding the right people to interview who can comment on what the person is like and capturing a person accurately.

That first piece – fact-checking – involved digging through public records, cross-referencing facts with other people and asking Harper to double-check on specific names, dates and other pieces of “oral histories” passed on by his family.

The second part – finding the right people to interview – was a matter of thinking through who knew Harper best in different areas of his life. I talked to a former coach, friend and fellow student, colleagues, family members, fellow pilots and others. This step was crucial to really understanding who Harper is and what he’s about. Although only fragments of those conversations ended up in the final story, the long phone calls and visits were all useful and worthwhile.

Bryan Harper is a hazelnut grower in Junction City, Oregon.
He is also vice chairman of the Oregon Board of Agriculture.
(Courtesy: Sierra Dawn McClain, Capital Press)

Finally, I wanted to capture Harper as he is, as accurately as possible, so that if a reader later met Harper in person, it would have felt almost like a second meeting. For that, I looked to writer George Orwell for inspiration, for I consider Orwell a master at writing with details. When I interviewed Harper, I took note of many tiny details, such as his love for 1960s Motown music and certain phrases he uses, like “as my grandma always said.” I later included these details in the story. The main thrust of who he is was captured through my overall interview with him plus the side interviews with people who know him, but I do believe the finishing touches were the little details I added that made him relatable and human.

Flying Farmer: One Man’s Journey to Reach New Heights on the Farm and in the Clouds won first place in the “Personality Profile” writing category in the 2021 ACN Awards.

Sierra Dawn McClain is a nationally award-winning field reporter for the Capital Press, where she writes about agriculture and related issues across the West. Previously, she worked as a freelance journalist and interned on the media team at the United Nations in Geneva, Switzerland. Sierra holds a bachelor’s degree in history and a master’s degree in journalism from the University of Oregon.