(Part one of a two-part series. Click here to read part two.)

Many winners of AAEA’s Andy Markwart Horizon Award never had a chance to meet the man this prestigious honor is named after. That’s a shame, because anyone who knew Andy loved him and his outlook on life.

Andy and I were good friends, work colleagues, fellow musicians and golfing buddies for many years before 2006, when Sudden Cardiac Arrest took him from us at age 43. This condition claims a life in the U.S. every 90 seconds and is responsible for more deaths per year than breast cancer. Most victims never see it coming. We sure didn’t.

Andy was a great editor, writer and photographer, but he was beloved for his character. He was quick with a joke and was eager to help everyone around him feel at ease, engaged and needed. He was the good-natured, fun guy who people gravitated toward at social gatherings. Yes, we still miss him.

Andy was editor of the John Deere Furrow and Homestead magazines when he passed. To honor him and his many years of contributions to AAEA and the profession, John Deere established the Andy Markwart Horizon Award so that his legacy would continue for the benefit of young AAEA members for years to come.

Winners of the Andy Markwart Horizon award embody the youthful vigor, energy, passion, dedication and creativity shown by Andy in his volunteer work for AAEA for many years. Winners are 35 years old or younger. We circled back to them to find out how this honor impacted their careers.

I was the first winner of the Andy Markwart Horizon Award, back in 2007. That came on the heels of the great shock and sadness in the wake of his passing; it hadn’t been that long since I’d been on stage with him, playing music at the AAEA annual conference. My memories of that time are of pulling three sets of classic rock together in one night with one rehearsal: the fun, the camaraderie, the talks about the joys and challenges of playing music at our churches, the room-service cheeseburgers.

Going on stage to accept the award, I remember carrying those memories, as well as the weight of being the first to receive the honor in his name. I remember, in a brief thank-you speech, mentioning how heavy that weight felt on that evening.

The stipend that came with the award was put to great use: a second course through the Stanford Professional Publishing program (now held at Yale) that helped me get a jump on what social media were going to mean for our business. Every project I’ve worked on professionally since then has had a social media element, including work for clients that won AAEA’s social media digital awards.

That kind of opportunity is the perfect continuation of Andy’s legacy; I’m honored and proud to be a part of it.

What makes the Andy Markwart Award so unique in AAEA circles is the award honors the combination of communication, leadership, and volunteerism. Quite frankly the Andy Markwart award embodies the passion and energy found by many who make a career in agriculture. Through its grant, I enriched my skills by taking a series of public speaking courses. These improved skills enhanced both my written and verbal communication talents. As a result, I have been invited to speak on dairy- and agricultural-related topics throughout North America, and in the Europe, the Middle East, Asia, and Oceania. Additionally, I have since been elected as Vice President of the world’s largest dairy breed organization — the Holstein Association. The Andy Markwart Award helped change the trajectory of my career.

I was extremely excited to receive the Andy Markwart award during the Ag Media Summit in 2009. I was honored to receive an award recognizing Andy’s contribution to agriculture and his volunteerism spirit. I used the monetary stipend to attend the International Federation of Ag Journalists (IFAJ) Congress held in Belgium in April 2010. This was my first IFAJ meeting and my first trip to Belgium so it was quite an experience.

I believe the experiences, workshops and tours all provided me with a greater knowledge of agriculture and journalism that I can use in my career today with the Georgia Peanut Commission and Southeastern Peanut Farmer. As a journalist and ag communicator, it is rewarding to be part of an industry that cares about the future of ag journalism and provides awards programs such as this to continue the betterment of our industry. 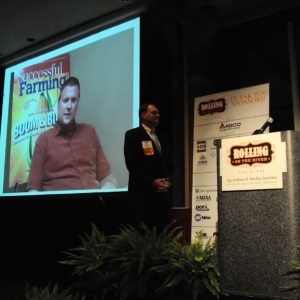 When I applied for the Andy Markwart Horizon Award, it was when my interest in technology, especially as it pertains to agriculture, was starting to explode. I used the award stipend to attend the SXSW Interactive Festival in Austin, Texas, in 2011, where I was given the opportunity to be part of a panel on mobile technology on farms around the world.

It was a big part of opening a new area of content and work that has shaped my career in many ways since then. In the years that followed, it not only provided me the opportunity to speak again at SXSW in 2014, but led me to pursue technology as a content area relevant to my readers. Today, I leverage that experience to the benefit of my clients through technology-related thought leadership work and content marketing.

Andy was an amazing guy, and I’m fortunate to have known him. That made being named an early recipient of an award in his name one of the greatest honors of my career. 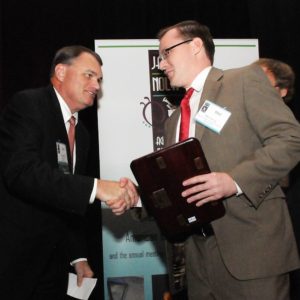 I felt honored to have been considered for the award and overwhelmed that my dedication to the profession and to the agricultural community was recognized by my peers. It was a huge accomplishment and something that I will never take for granted.

To be honest, I never met Andy Markwart. I did not have the foggiest idea who he was. After receiving the award, I did some research. I read what he wrote and talked to many people about Andy. His passion for agriculture, amazing work ethic and relentless pursuit to advance American agriculture became very clear to me. I felt beyond humbled after I realized the kind of person this award was established to honor. I feel like I knew Andy and his name hangs in my office.

It isn’t difficult to get burned out and exhausted by any career. You need to keep it fresh. I used the award to pay for my attendance and participation at the Ag Media Summit. This award really helped to re-energize me. While I never met Andy, this award keeps me pushing to maintain the enthusiasm, dedication and resilience that Mr. Andy had.

The award winner receives a $2,500 stipend, which can be used to attend the International Federation of Agricultural Journalists (IFAJ) annual Congress, the Agricultural Media Summit or other professional development class, seminar or workshop. Go to this link for complete application information. Applications are open to any AAEA member age 35 or younger. Please submit:

— Essay: 500 words or fewer describing your interest in receiving the stipend and why you believe you are deserving, your current and past AAEA involvement, and your professional goals.